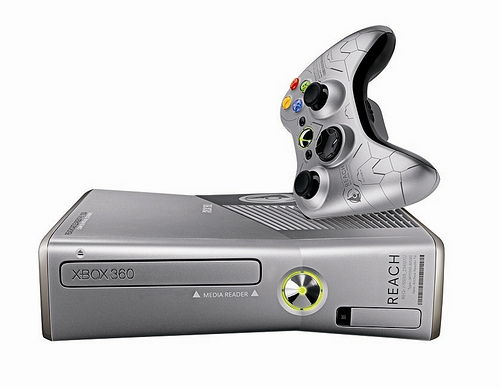 If you are a fan of Halo and have yet to pick up a new Xbox 360 S, then you might want to wait just a few months more before picking one up. Microsoft announced yesterday at this year’s Comic Con in San Diego a new Limited Edition Xbox 360 S bundle for their upcoming Sci-Fi shooter Halo Reach.

The console will release on September the 14th when Halo Reach also launches and will retail for a RRP $399.99 (~£250-280 in the British coin). The console will come with the standard features found in the currently selling Xbox 360 S – so that means a 250GB Hard drive, and built-in Wi-Fi.

So will you be making a Halo in your pocket, and Reaching for your wallet to pre-order? Let us know your thoughts on the new Halo Reach console in the comments.

Anthony is the designer, developer and owner of Console Monster. In his spare time, Anthony is a keen gamer who enjoys playing mostly First-Person Shooters and Racing games. When he is not developing games or tweaking this site, Anthony likes to be on the slopes snowboarding or hurtling down off-road tracks on his mountain bike.