Today Chris McQuinn from ‘Guacamelee!‘ developer DrinkBox Studios was kind enough to sit down with us and answer a few questions about the brand new ‘Super Turbo Championship Edition‘ release of the game.

CM: Greetings and thanks for setting aside the time to talk to me today. First off, could you let us know who you are and what is your role at DrinkBox Studios?

Chris McQuinn: Sure thing, I’m Chris McQuinn, and I’m one of the Designers at DrinkBox studios. Basically that means I do a range of things, from figuring out what a player will do in a level, to how the mechanics of the game will actually work.

CM: DrinkBox is based in Toronto, correct? How would you describe the company, and has your location influenced your games in any way?

McQuinn: Well…we’re a pretty small outfit, and our studio has been described in the past as smelling like a LAN party. It’s a pretty relaxed company, we pride ourselves on not crunching too hard, and try to create an overall pleasant place to work. I think being in Toronto has positively influenced our games because of the other great indies here (Capybara, Metanet, Queasy Games among just a few) – the quality bar just gets raised.

CM: Your latest release, ‘Guacamelee! Super Turbo Championship Edition’ is a newly released version of the original ‘Guacamelee!’ for next-gen consoles, could you give me an overview of what this new version is all about?

McQuinn: The new version of Guacamelee! includes a lot of new content which has been woven into the story and game progression. Updated graphics, new levels, expanded story, new enemies, a new boss, dual currency system, new powers…ya. There is lot’s there.

CM: What are some of your favorite features or moments in the game? And is there anything that you had to leave out that you wish it made the final release?

McQuinn: The nice thing about this release is that we were able to put in all the things that were cut out from the original. I don’t want to spoil too much, but there is a “mini-me” moment in the game which I find hilarious, and involves the main villain of the game.

CM: Super Turbo Championship Edition made the jump from last-gen to next- gen, what were some of the difficulties of working with the new hardware?

McQuinn: Generally working with the new hardware has been much better than the last generation. One challenge that occurred was the platform specific software often updated, so we had to stay aware of this while in the middle of development.

CM: The PlayStation 4 and Xbox One offer different features than one another, such as the PS4’s touchpad and the Xbox’s Kinect sensor, did you implement any of these features? If so, what purpose do they serve?

McQuinn: There are no major differences between the different versions of the game. 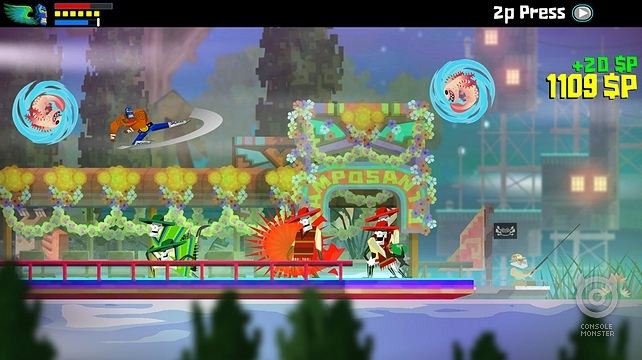 CM: Guacamelee has a very ‘Metroidvania’ feel, as it’s come to be called. Are the team members over at DrinkBox fans of the Metroid and Castlevania games?

McQuinn: A lot of us in the studio are big fans of the genre and all those classic Metroids/Castlevanias. This was one of the major reasons we initially decided to make Guacamelee!.

CM: Obviously the game is steeped with Spanish culture, what made you choose this for a base for the game?

McQuinn: Our animator Augusto grew up in Mexico, and his feeling homesick resulted in the proposal of a Mexican setting for Guacamelee!. Everyone at the studio looked at the folklore and culture that Augusto was suggesting and we basically fell in love with the idea.

CM: Now that you have released what seems to be the ‘definitive’ edition of Guacamelee, what does the future hold for DrinkBox Studios?

McQuinn: Right now we’re letting the dust settle a bit post Guacamelee! and have started working on a few new titles, one of them being Severed (www.severedgame.com). We’re excited about starting something new.

CM: Speaking of other games, what are some of the current favorites of the team?

McQuinn: Currently the team is playing a lot of Towerfall. A lot.

CM: Thanks for taking the time to answer some of our questions, and best of luck with ‘ Guacamelee! Super Turbo Championship Edition’ and any future titles as well!

McQuinn: Thanks for taking the time to chat!

Guacamelee! Super Turbo Championship Edition is out now for PlayStationand Xbox consoles. Be sure to keep an eye out for our review in the very near future.

Introduced to video games when he was only five, after dying somewhere around four thousand times while playing Star Tropics, he never looked back. Some of his favorites range from titles like Shenmue and Metal Gear Solid 3 to Half-Life 2, Manhunt, and the Dark Souls series. Justin has a passion for vinyl records, and loves to collect video game memorabilia. If he had one wish, it would be to travel back to 1984 Miami.

Mask of Mists: A Fantasy RPG for Casual Players